At the first board meeting following the recent legal case, we discussed the very significant role our “Life Members” had played at the E.G.M which deposed the former directors. Since 1981, “life membership” had been granted to officers of the Carp Society, and those who had made a significant contribution to carp fishing. The former board had attempted unsuccessfully to remove life members, but the legal buffs ruled they could not do this. Hence the vote to remove Malcolm Coller, David Mannall, Shane Thompson and Derek Buxton was upheld. We have now added to the list of life members the following former officers and long term supporters of the Society.

Maurice Steeles, Paul Willis, Les Bamford, Paul Selman, Vic Cranfield, Mike Kavanagh [the architect of the Horseshoe lake purchase], Mike Wilson, Brian Mills and Steve Bowles. These guys will continue to ensure the Society has a long term future and is never threatened again in the manner it has been in recent times. Tim Paisley is now the Carp Society President. John Seal joins Bill Ward as Vice President. In recognition of the increasingly important role filled by Sabrina Widdows in the Society office she has been co-opted onto the board as a director.

The Society has a stand at the Northern Angling show this weekend, courtesy of Jamie Clossick. Miles Carter and Steve Hall will be at the show to represent us and carry on the fund raising. Tim will also be at the show on Angling Publications stand.

We are looking for offers of help from anyone who can build shelving and cabinets for our Carp Fishing museum, to be based in the lodge at Horseshoe.

We also need donations of auction items for our “Big Auction” to be held at the end of our “Fun Weekend” on the 15th and 16th July at Horseshoe Lake. READ MORE

Look out for further announcements about the event over the next few weeks. This is a celebration of the success in saving the society, including the official naming of the lodge at Horseshoe. Fun for all the family, bring your children, trade stands, food, drink, demonstrations and lots more. Keep an eye on the Society Face Book page and web site.

Finally for now we are setting up a 12 man syndicate to fish Little Farriers in the winter months starting this year. At £200, you may want to get your name down now! More information to follow. See you over the weekend of 15th and 16th of July! 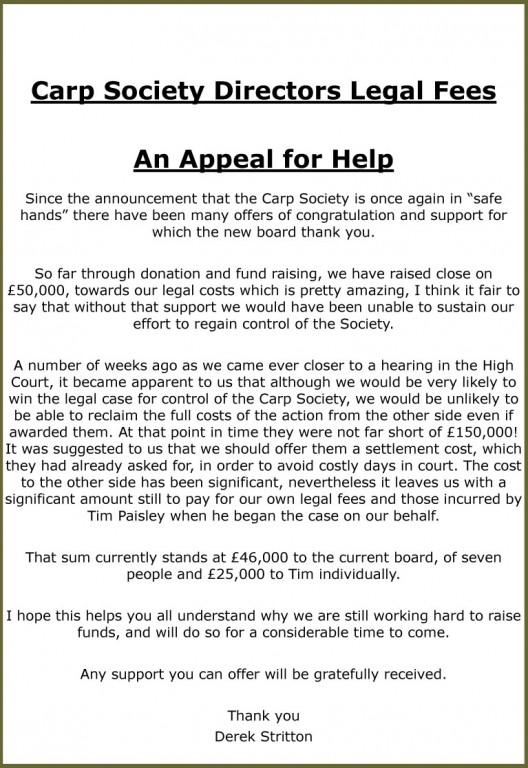