*** Voting/proxy forms (at the bottom of this page) need to be completed and returned to the Society office by midday Friday 26th November. ***

AGM PAST MINUTES TO BE AGREED

The following people are standing for election at this years AGM

Director statements are available at the end of this page 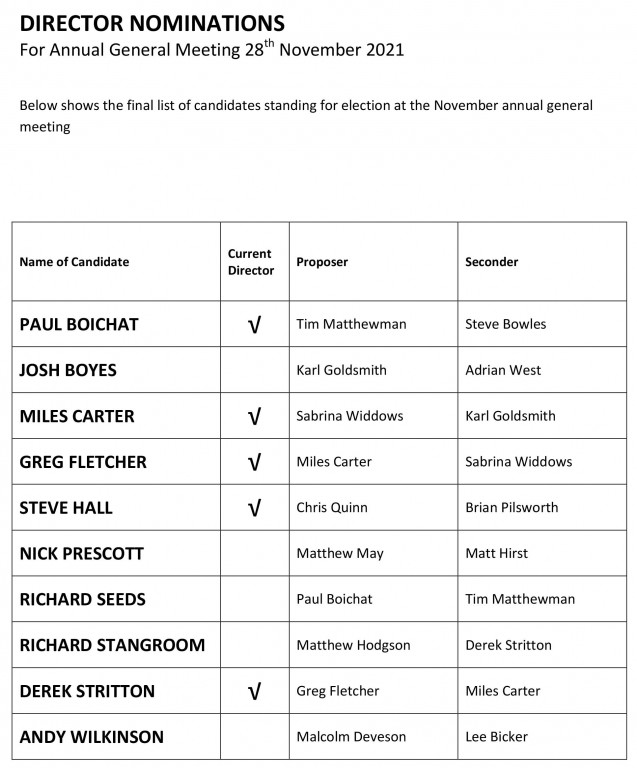 How to cast your vote

A Carp Society members can vote following one of the below methods.

- In person at the AGM on the above date

- By completing a proxy form (below) and sending/emailing it into the Carp Society office. This allows you to nominate another member who will be attending the AGM to vote on your behalf

- By completeing the attached voting form chosing a maximum of 6 names from the list of nominees.

- Each member may vote using one of the above methods only

- Where voting by proxy or voting form the completed form must be received to the Society office by 12 midday Friday 26th November. Forms may be completed and emailed to sales@thecarpsociety.com or posted to The Carp Society, Horseshoe Lake, Burford Road, Lechlade, Glos, GL7 3QQ

I have been involved with the Carp Society for nearly 30 years and have had several roles including regional organiser, director and I ran the junior events for a number of years. I have a good commercial back ground working for BT for 32 years which will enhance the carp society as a business. During my last directorship the society has been allowed to grow and I have been involved in a number of projects that will secure the society for the future. I would like to continue my role as a director and therefore I have been nominated to re-stand to continue to drive the society forward.

I fell in love with Horseshoe the moment I first stepped foot on her nearly ten years ago. I’ve fished it (and Farriers) regularly since then. Aside from the fishing, I’ve involved myself in Society activities more and more over the last few years. I’ve been a tutor at several Junior Carp camps and I have helped out at fund raising events. I’m also proud to say I am the Society official fishing coach, a position that I love and one that gives me a tremendous sense of ‘Putting something back’. My involvement with the Carp Society as given me the appetite to get further involved. I would relish the opportunity to help the Society push even further forward, and if you vote for me I promise to represent you proudly, honestly, and actively. I will give it my very best and always strive to help the Society and its members.

Having played a major part in steering the Carp Society through some of the darkest parts of its history (the fish kill on Horseshoe and the attempted sale of Horseshoe spring to mind) I have hopefully demonstrated my commitment and dedication to you. It would have been easier, as so many people did, to have just quit the fight. Not only did I fight then but I have fought ever since and not only are we now through those dark times, but we (The Society) are now in the best position we’ve ever been in since its conception. During my time with the Society I’ve been the driving force in getting all our lakes fenced, the opening of Little Farriers, the restocking of Horseshoe, the construction and development of 4 stock ponds, the security gate, new roads round the lakes, and countless other improvements. I am now asking for your vote to allow me to carry on the good fight, and complete the many other projects I’ve got in mind to not only improve on the fabulous position we are in now, but to make the future not just bright, but safe for the Society and you, it’s members. Thank you

Being a founder member of the Carp Society back in 1981, and consequently the first Treasurer and Conference Secretary, I am a current Life Member and I have served as a board member for the last 5 year term. This period involved the troubled times of the well documented ‘legal battle’, which members of the current board self-financed at considerable personal risk, but was successful and enabled the Society to emerge as a stronger organisation, with renewed respect and reputation, and with the current stable infrastructure that is in place today. Throughout this time the current Board has overseen the publication of several books, arranged conferences along with various social events at Horseshoe HQ, all of which have re-established the Society’s profile and encouraged membership back to the respectable level it is today. It is hoped that in the near future we will to able to make a further major announcement which takes the Society forward to another level and further reinforces the Carp Society as the leading specialist angling organisation in the UK. The Carp Society is now in the strongest position it has been for many years and these are exciting times for the Society. I am putting myself forward for board re-election for another term as I would like the opportunity to continue to guide the Carp Society to further growth and development for the benefit of current and future members.

I have been a member for over 30 plus years and I am a staunch supporter and current director of the Carp Society attending and helping at many of the shows and events in this time, also being constructive in developing a disused barren quarry into a beautiful lake to fish for the future anglers and would like to re stand to help progress the Carp Society for the future.

It's been a privilege to support the Carp Society team over the last few years. I would relish the opportunity to bring my business and life experience, innovation, ideas and energy to the board and seek to shape and influence a future-facing manifesto with these member-first objectives. Modernisation - aligning the society proposition to better resonate with current members and appeal to future members. Investment - enhancing the society's ability to invest in waters, on-site facilities, assets, and member engagement through fundraising initiatives. Enhancement - building tangible value into membership, evolving the member culture, voice and community, to bring clarity to and galvanise support for society objectives. Prosperity - influencing sustainability and growth through expanding society interests, activities and prominence in carp angling.

My name is Richard Seeds, I’m 38 years old and fishing has basically been my life ever since I first went at the age of 4, I was absolutely hooked and obsessed with it. After I left school I went on to train and qualify in Fishery Management at Sparsholt College. I am lucky enough to own and run fisheries myself. My involvement with the Carp Society started at the age of 12 when I went on my first August junior fish-in to Horseshoe Lake and I fell in love with the lake, I went on to attend the first ever carp schools, meeting some great friends. Over the years I have gone on to be an instructor at many of the Carp society events. I have been a member of the Society since I was 12 and continued to re-join every year, even through its troubled period to help stop the Carp Society being dissolved. I’m standing for election to support the Society in the positive direction in which it is going. I like to think my experience and knowledge in the Carp fishing industry and Fishery management will be of benefit to the Society, its fisheries and members. Also it would be great to put something back into the Society especially the juniors and hopefully encourage more youngsters into the sport.

As a proud life member of the Carp Society, I was first involved with the running of the Society throughout the growth period of the mid to late 90’s; initially in a voluntary role, organising the winter and spring conferences, as well as running the Hertfordshire Region, before later working as the fulltime Commercial Manager, and so I already have a good understanding of the day to day running of the Society. Following the more recent court case, I offered my services (free of charge) to build a new website for the Society and have more recently attended Directors’ meetings in an advisory capacity, making recommendations relating to how best to grow the Society membership, particularly via social media and other online opportunities. Since joining the Carp Society in the mid 80’s, I have always believed in the need for there to be an organisation representing carp angling and carp anglers, and I now feel the time is right for me to get back involved at a level where I can have a more positive impact.

I was a founder member of the Society, and joined the first ever ‘steering group’ at the inaugural meeting in Sheffield in 1981. After being Chairman and treasurer over a number of years I was granted life membership. I was also one of the debenture holders who assisted the Societies purchase of Horseshoe. Five years ago I was elected as a Director at the EGM to remove four former directors. The new board subsequently elected me as Chair, and together we fought a legal case to return the Carp Society to the organisation we believed it was intended to be. To do this we fundraised to cover our legal costs. Over the past 5 years we have improved facilities at our lakes and our offer to members, introduced a fish rearing programme and stock ponds, Horseshoe open weekends, a fishing museum, published four books, re introduced Carp Fisher magazine, purchased Carp Radio and we are currently working on an exciting new venture which we hope to announce in due course. The Society now has a significant number of members again and a sound financial future. I am seeking to be re-elected to work with others to see the Society through the next stage of re-development and its new venture.

Hi, I'm Andy Wilkinson, I'm a 57 year old heating engineer and I've been carp fishing since the early 80s. I first fished Horseshoe around 9 years ago. I became involved with the Carp Society firstly just helping out around the lakes, I became a bailiff on Horseshoe around 6 years ago but since then you'll have found me trying to part you from your hard earned cash on the Carp Society stand at carp shows. (you really do need another tee shirt you know). I truly believe that I have more to give to the Carp Society and joining the board will enable me to work more closely with the expansion and future of the Carp Society.