On Friday 14th June Derek attended Roger Smiths funeral along with Roger’s family and close friends, of which there were many. A very fitting send-off organised by the family and a eulogy given by his long term friend Brian Hankins of which I am sure Roger would have been full of praise in his own unique way.

Roger was a great servant of the Carp Society, BSCG and carp fishing in general over many years and will be remembered fondly by many.

If you knew Roger you would know he loved dogs and as such Rogers family have chosen a fitting charity the Blue Cross for anyone wishing to make donations in memory of Roger.

The Carp Society will be sending a donation of £100 today in memory of Roger, anyone wishing to do so, donations can be sent by cheque to “Blue Cross” and sent to JJ Burgess & Sons, Alfred House, The Common, Hatfield, AL10 0ND (as detailed on the order of service)

As always our thoughts are with his family, friends and especially Kerry, Mark and Brian. 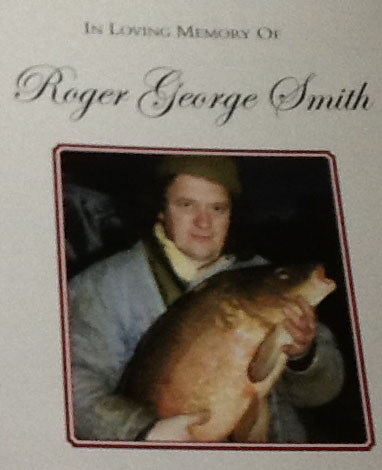