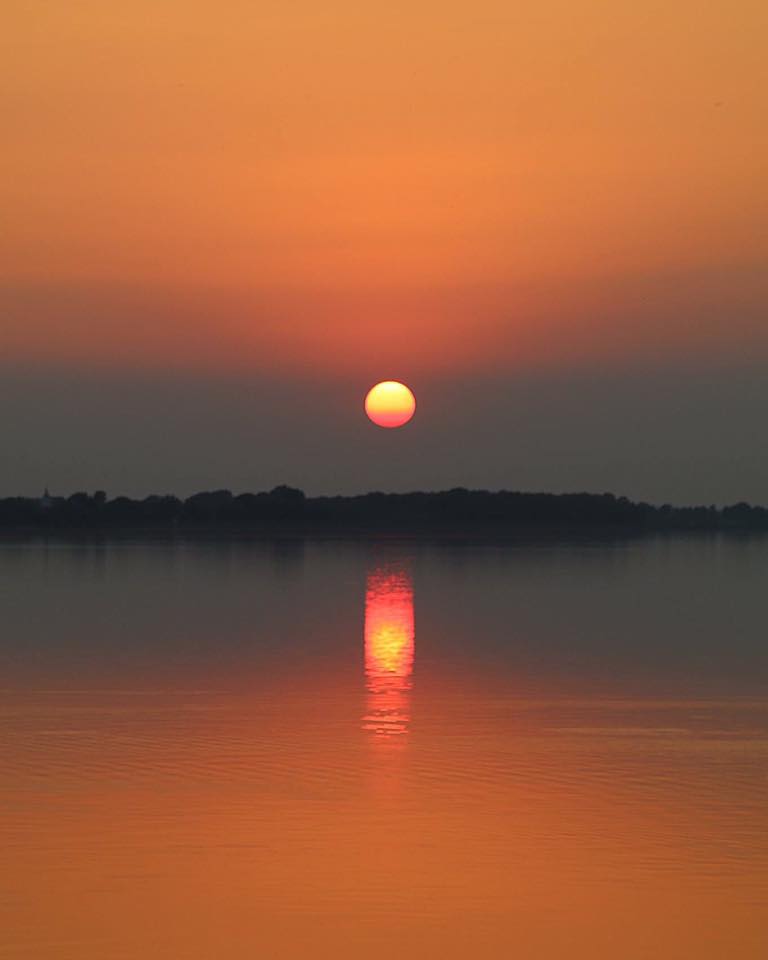 Last week, we at Horseshoe played host to the English qualifying round of the World Carp Classic. Derek first approached me about the possibilities of us holding the event at Horseshoe some time ago now and put me in touch with Ross (who runs the whole World Carp Classic), and following a few email exchanges and a visit from Ross, we decided to go ahead with hosting the qualifier. I was a little uncertain as to the suitability of Horseshoe for ‘Match fishing’. We had tried it once in 2013 and that didn’t work for us but having spoken to Ross and had the format explained I was a bit more optimistic. The format of the competition means the winners are the team with the highest total weight of their 3 biggest fish. So even if someone dropped onto the fish and had 20 or 30 they could still be beaten by another team who say only had 3 fish. I liked the idea of that and thought it would work on Horseshoe so we agreed to host the event and a date was set. 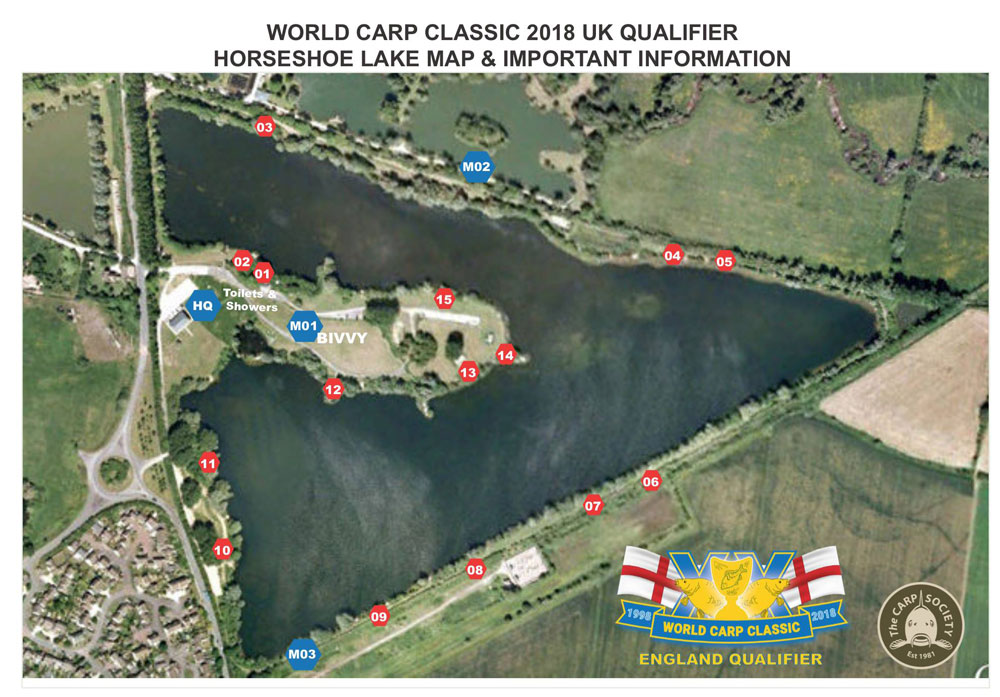 The 15 swims pegged out on Horseshoe

The days leading up to the event were quite concerning as the weather became better and better and I was hearing reports of fish spawning in the surrounding area. The fish hadn’t spawned on Horseshoe and I was very nervous that they would spawn just before the event, which would have been a nightmare and more than likely would have meant cancelling the match. Given all the preparation that had gone into getting things ready, both by us and Ross and his team, that was definitely not a decision I was looking forward to making. Ross and a couple of his guys arrived on the Wednesday evening and we made a start on the build-up, we got a few bits and bats done and went through the swims and decided on how to peg the match. 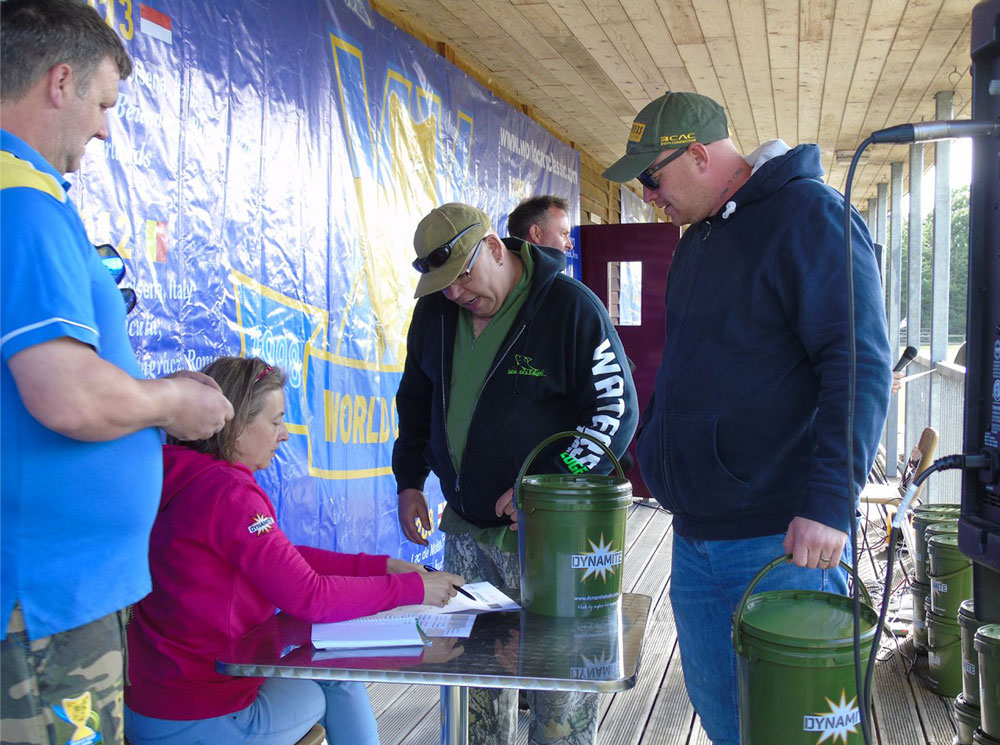 Thursday morning we were all up bright and early and following a couple of Bacon and egg sandwiches we were soon back at it. Unbeknown to me Ross is a bit of a vexillophile and it wasn’t long before we had Horseshoe looking like the last night of the proms, Sheldon would have been ever so proud. Not before long, the competitors started turning up and walking round the lake. Ross had arranged a hog roast and BBQ for the evening and brought a few beers and wines with him and a very pleasant evening ensured with anglers and organisers socialising and generally having a nice time. Ross, Martin, Janis and I then went round the lake and pegged 15 swims, not the easiest of tasks given we’d left it till dark, fortunately though Janis had her trusty torch so all was good. 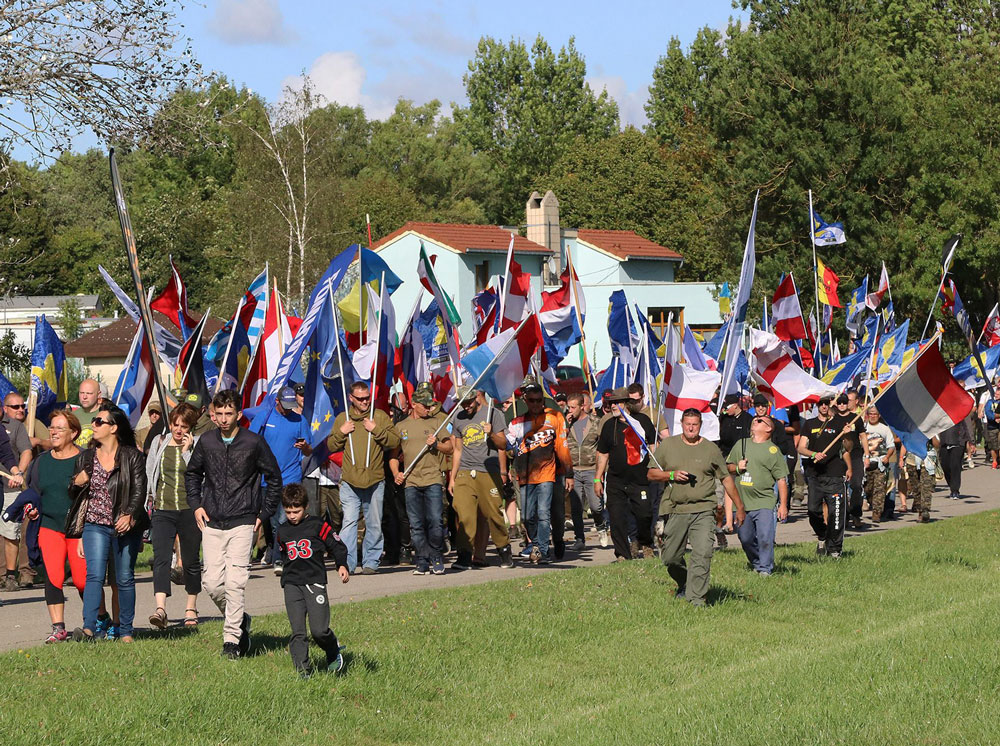 We had pegged the lake in such a way that I felt everyone would be in with a chance but the draw was still going to be interesting. My pre draw prediction was that ‘The Lawns’, swim 73 on the Horseshoe map would win the match, I also said 70lb would win it. The draw was made early Friday morning and the anglers took their tackle mountains to their respective swims and awaited the hooter for the official start. Two of ‘Our Lads’, Josh Boyes and Rob Saunders had entered the competition and had been drawn in swim 21 on the Horseshoe map, that’s on the Winter Bay Road Bank for those of you familiar with Horseshoe. It’s a decent swim that does produce fish but it wouldn’t of been mine, or Rob and Josh’s pick of swims, so they were up against it in my opinion. They would have been slightly encouraged though when the first fish of the match came from swim 15 (Winter Disabled). Slightly less encouraging though would have been when the guys in the lawns landed a good mid-20. Swim 5 also landed a fish so it was definitely game on as I eventually called it a night and went to bed about 10 o’clock. 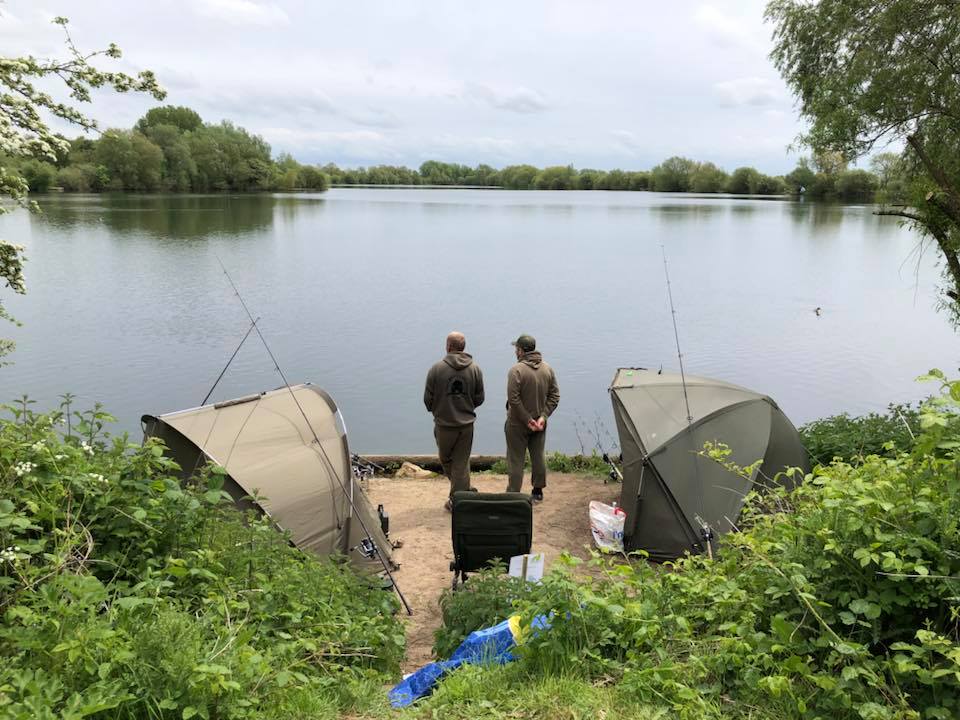 "What do you think then Rob?

I was woken about 4.30 the following morning with a message from Rob saying they had one in the net and were waiting for the Marshalls to do the honours. I think this fish was mid 20 so that put them in second position behind the guys on the lawns. The guys in the split swim though by this time had landed a couple of good fish that had put them in first place. The pair in the lawns then landed another mid 20 that leap frogged them into first place. It was all getting real now, the nerves were kicking in and it was still all to play for. Anyone of the 15 pairs could have still won as I went to bed Saturday evening. There was fish in both Summer and Winter bay, the only place I hadn’t seen fish was up in the 50’s where a couple of pairs were fishing but hadn’t landed a fish yet. I’d fished up there the previous week and whilst I was setting up, the guy opposite landed 7 fish in less than a couple of hours so these guys were every much in with a chance, they just needed a few fish to get up there. From what I could tell they were fishing it well, it was just a case of would the fish get up there before the match ended at 9am the following morning? Nail biting stuff.

The guys on the split swim

I was up early doors the Sunday morning and just missed Rob and Josh land a mid double that pushed them into the lead. There was 4 hours to go now and only 6lb separated the top 3 positions. I walked round the lake and there deffinatley didn’t look to be the amount of fish in Summer Bay as there had been the previous 2 mornings, but there was still fish there. Would the guys on the lawns or the Springs get that 1 little fish that would take them to Madine? Would the guys in the 50’s eventually get on to fish? There was fish in the channel as well now so it was quite feasible that any of the pairs would catch in there. It couldn’t have been any closer. 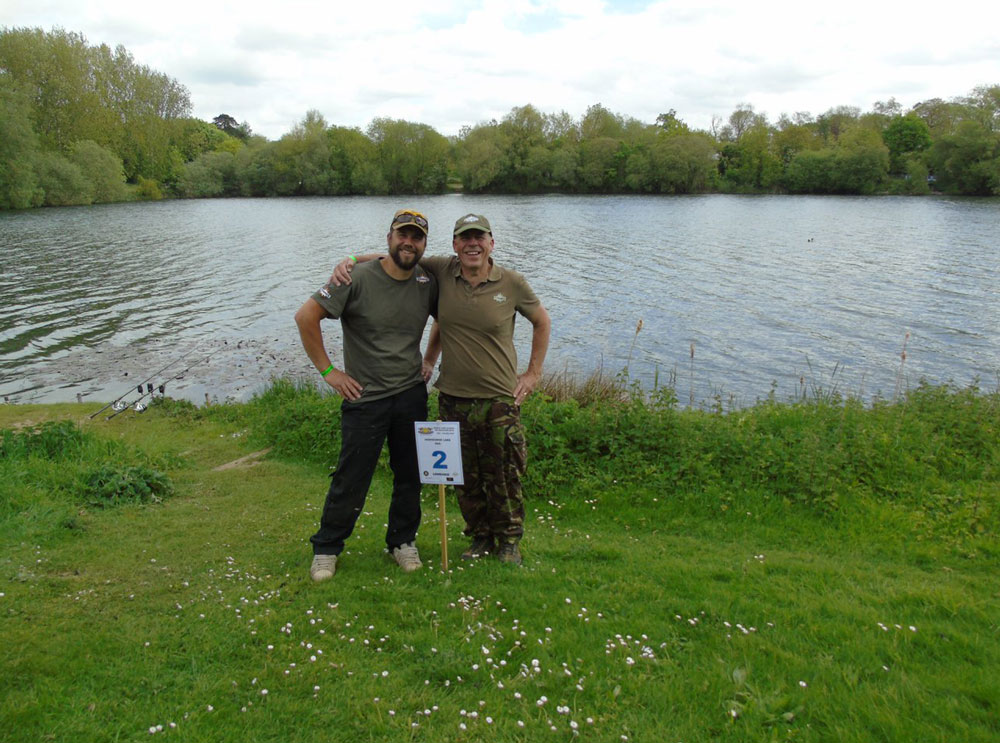 The guys on 'The Lawns' fished well to pinch 2nd place.

I was rooting for our boys (Rob and Josh) but all the other pairs were good lads so I had mixed feelings but I really did want Josh and Rob to win. I went to their swim for the last half hour and we all waited nervously as the clock ticked down slowly, boy did it tick down slowly. With 5 minutes to go Ross and his team turned up behind the swim but even with 5 minutes left it was still anyone’s to win. The smallest fish in the lake would have swung it, it was that close. Josh and Rob were a bag of nerves, has we all were. 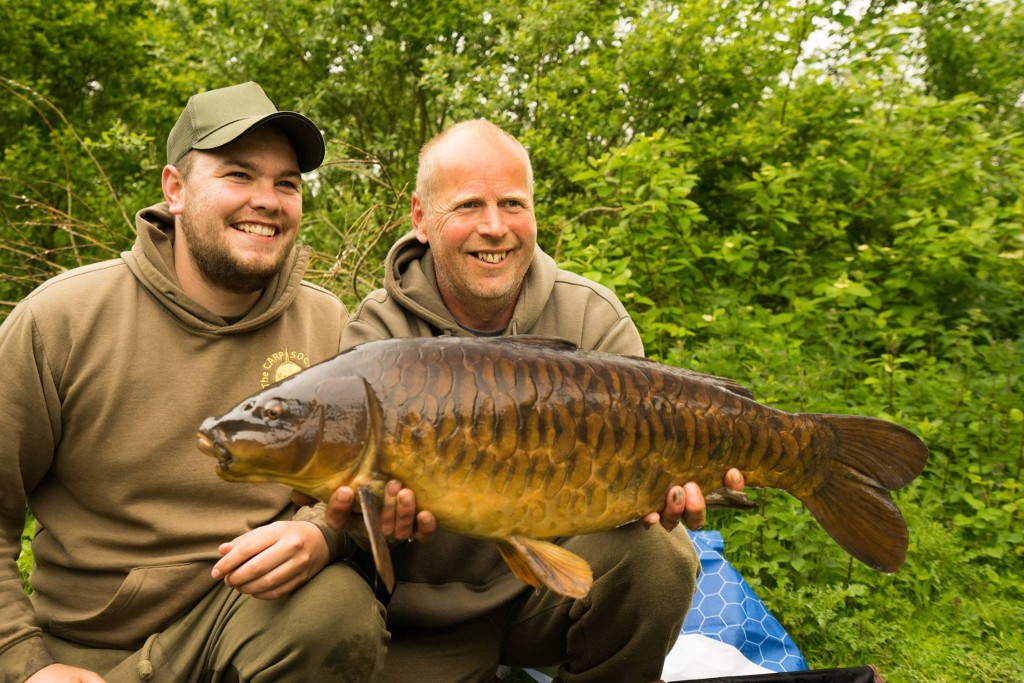 The fish that inched them into the lead 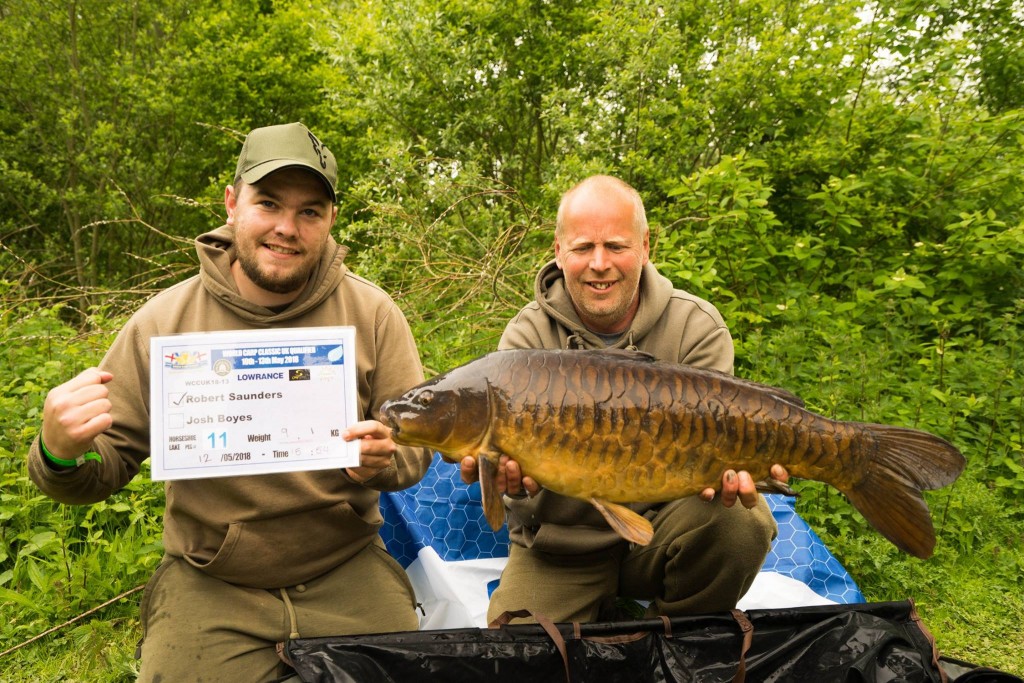 After what seemed a lifetime though the final 5 minutes were up and the hooters blasted out the end of the match. Rob and Josh were champions, they were going to Madine. Awesome result and richly deserved because they fished hard and they fished well from a swim that they didn’t really fancy. In fairness to the other guys I think what swung it was home advantage. Both Rob and Josh have bags of experience on Horseshoe, although neither had fished it much for a couple of years with them both being on Farriers now, I definitely think prior knowledge of the lake was a great help. 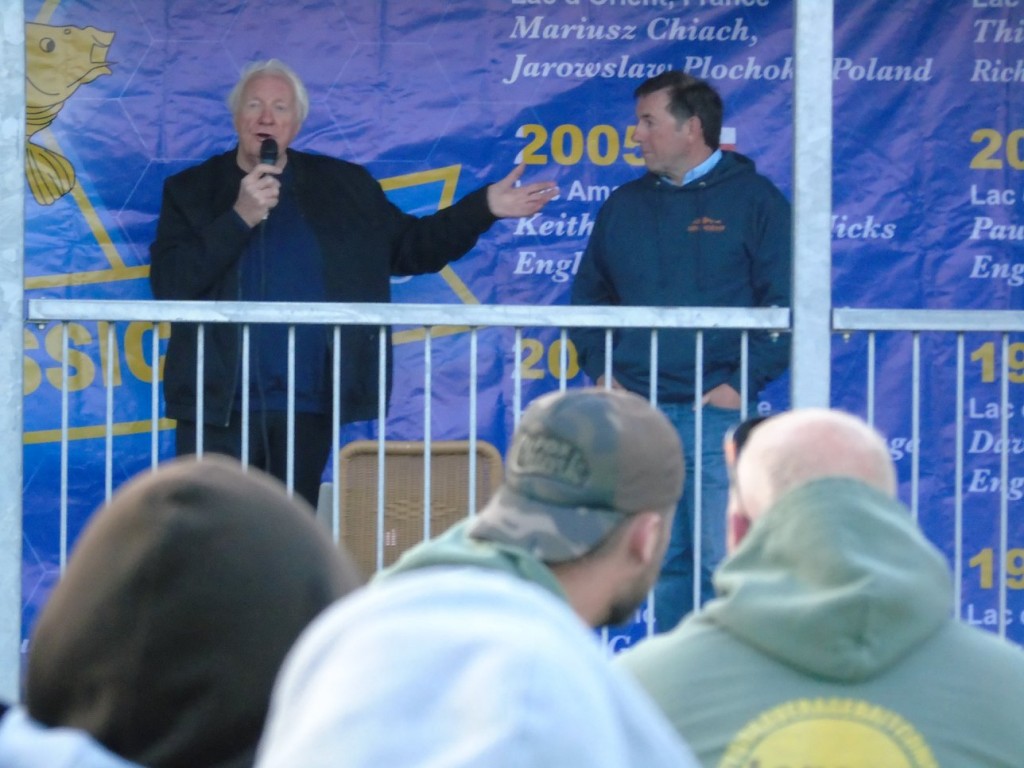 With the match over, the anglers gathered outside the lodge for the presentations followed by the customary soaking for the winners, then it was clear up time and time to go home for a well-earned sleep for everyone. 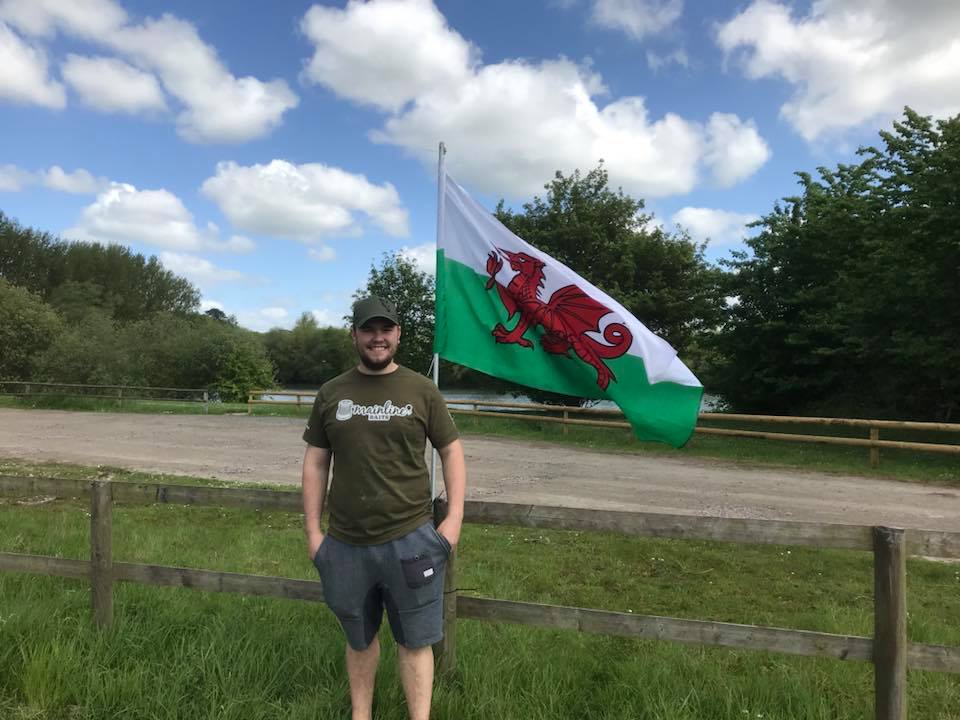 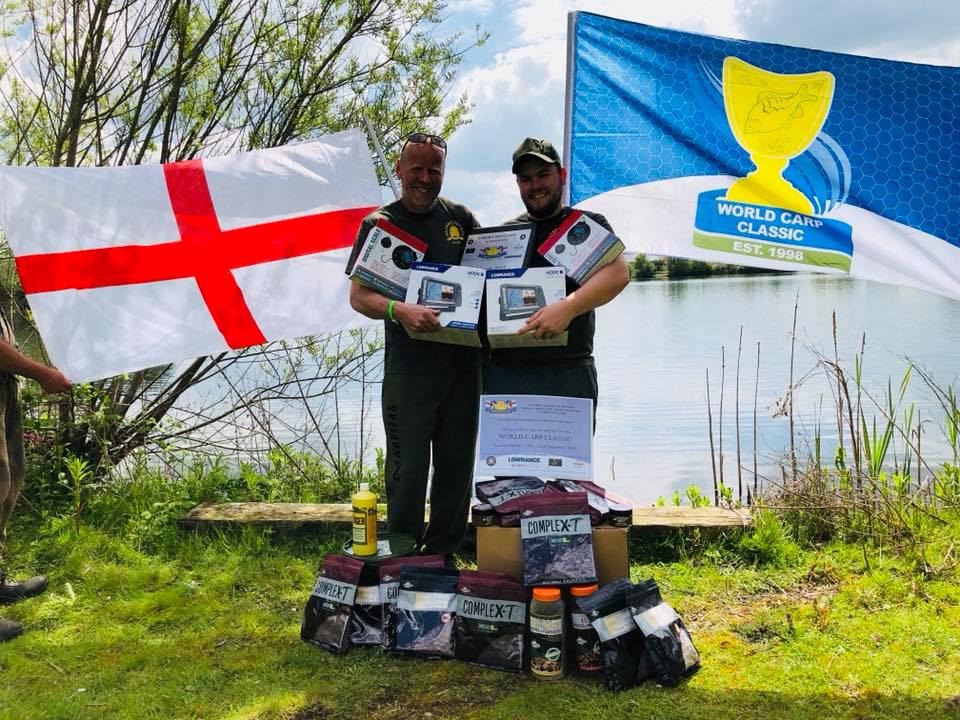 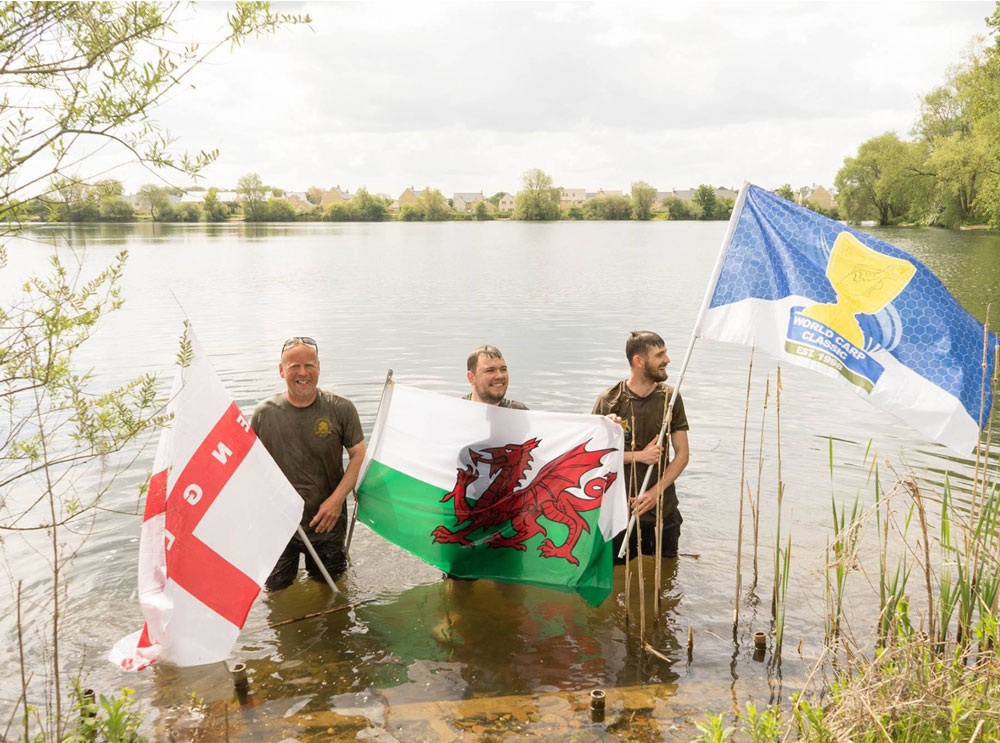 From being a bit unsure about the event at the start I can honestly say that I’m so glad we took it on. It really was a fantastic friendly weekend and a credit to everyone that took part either has a competitor or a marshall or helper. Ross and his team run a very professional outfit without sacrificing the fun. You might think that’s easy but I know from my own experience it’s nowhere near easy and I take my hat off to Ross and Marie and all their team. Well done all of you. 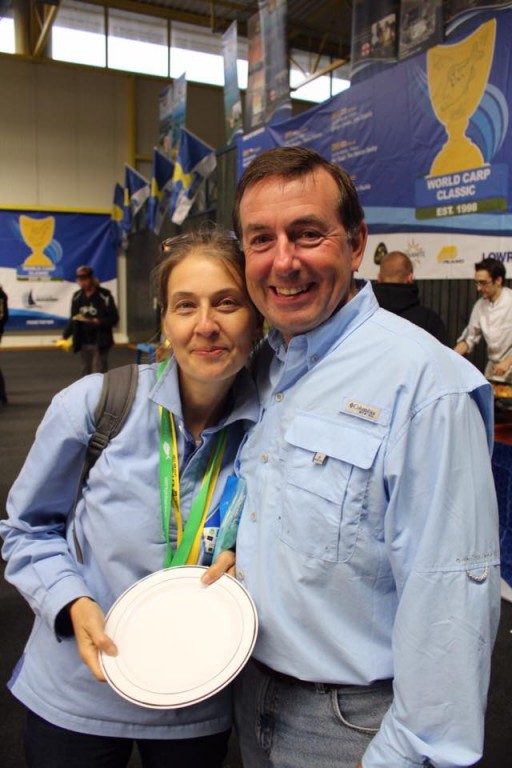 So then, it’s off to Madine next for the boys and for yours truly as well. Yes you read that right I shall be joining Rob and Josh as the 3rd angler or Super Sub as I shall now call it. I’m not 100% sure what the 3rd angler is allowed or not allowed to do but either way it’s an honour to be asked to take part so thank you very much Rob and Josh for asking me, I think with your two’s fishing ability and my flukeyness, you never know, we could pull off a surprise. Having said that and looking at Madine, we are all well out of our comfort zone. Madine is 26 mile round with all sorts of islands and obstacles, not to mention the waves when the weather gets up, it wont be unlike an episode of Deadliest Catch if the weathers rough. There’s something like 120 pairs from all over the world competing, teams from Japan, Austrailia, America, all four corners of the world really, so just to be there is going to be fantastic. But we are going there to win and if we don’t it wont be for the lack of trying, but there’s some serious competition so hopes and expectations are probably miles away from reality but it’s pointless going expecting to lose. One thing I do know though is win lose or draw, we are going to enjoy it. Rob and Josh are canny lads so we will have a laugh if nothing else. 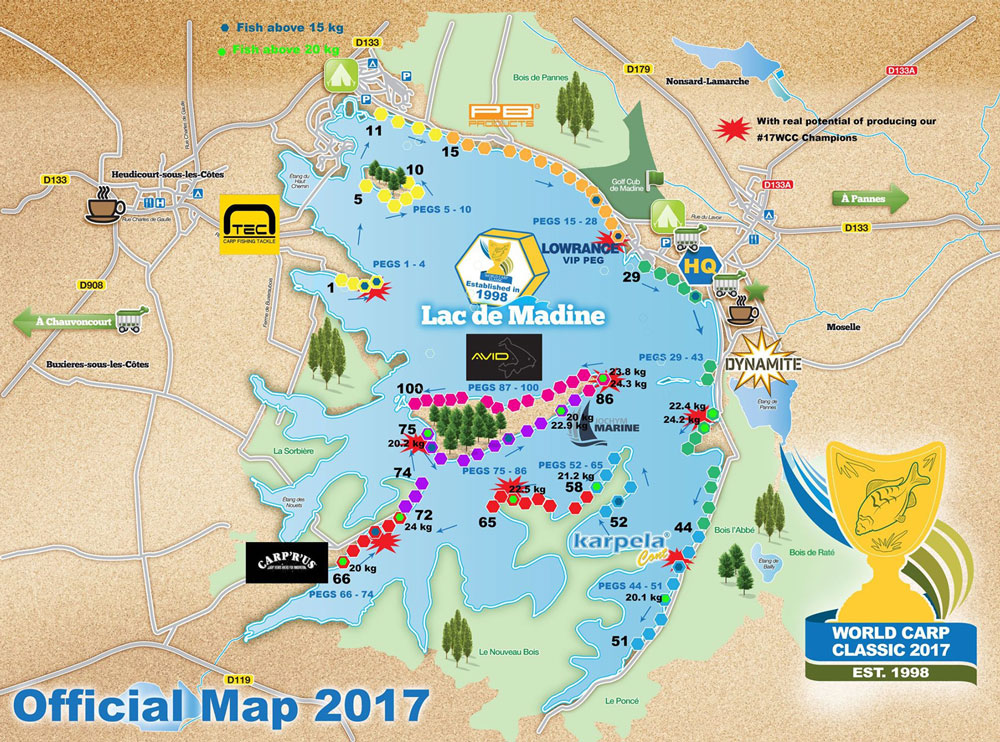 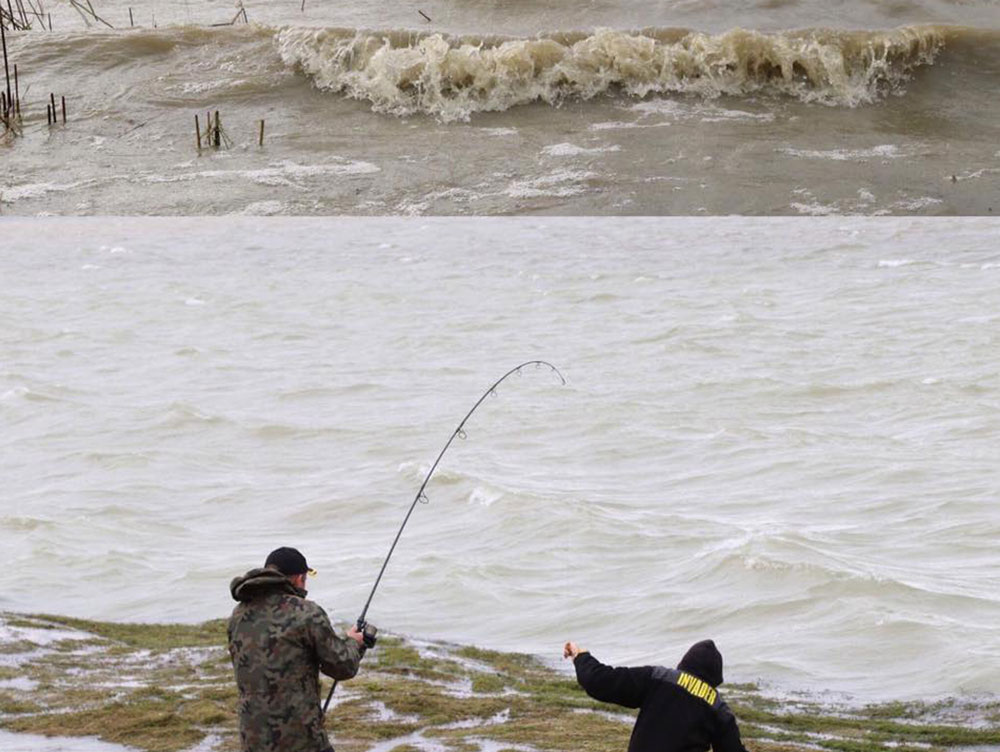 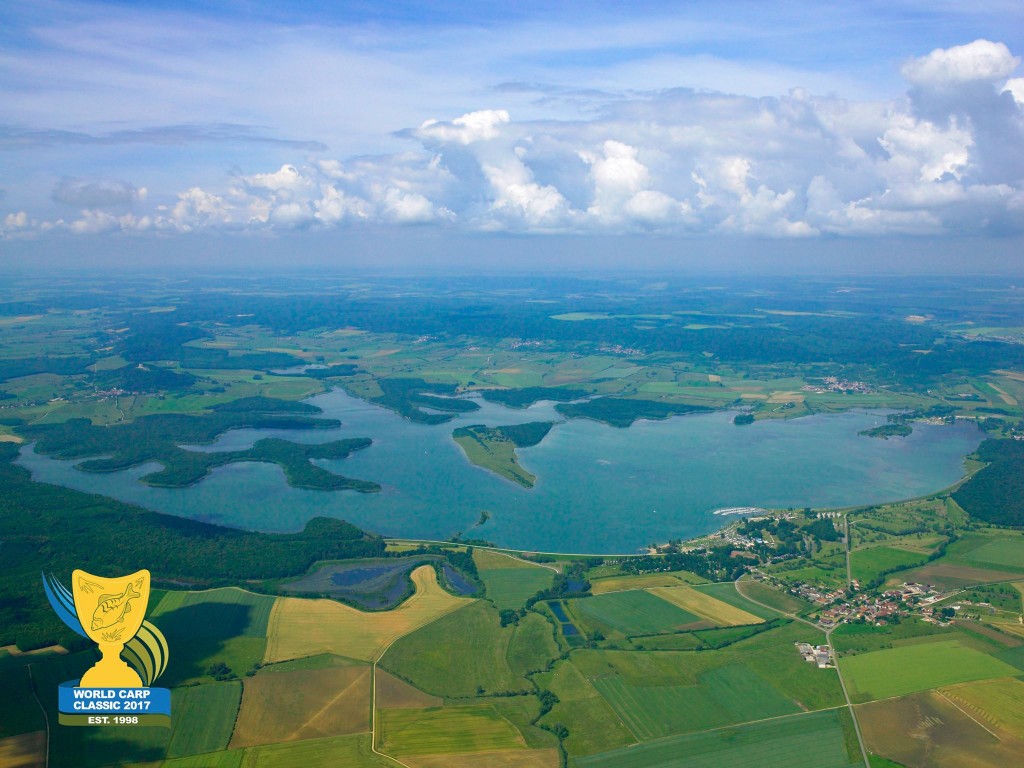 Next stop, The Mighty Madine